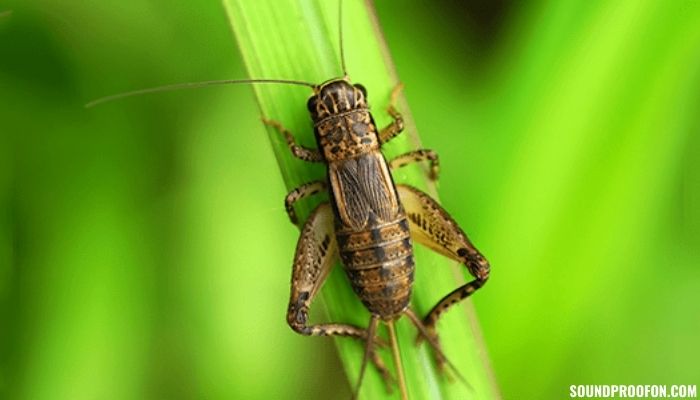 Crickets are small creatures that produce noise at night. While some people describe the sound as melodic, most individuals find it irritating. Imagine a situation where you’re trying to catch a nap but all you can hear are cricket chirps and noises.

It’s interesting how crickets prefer to inhabit areas that are close to humans. Since they become more active during the night, crickets are categorized as nocturnal creatures. You might catch a few chirps here and there during the day, but that doesn’t compare to the music show they put up at night.

Another interesting fact is that female crickets remain silent while their male counterparts make all the noises. Scientists have explained this behavior by terming it as a mating call where male crickets strive to impress and attract the female ones.

However, this is none of your business, especially, when you want some peace and quiet. All you want is for them to just shut up. There are different methods to get rid of these animals and save yourself from the sleep deprivation that comes with noisy nights.

In this context, we have offered you different remedies that you can incorporate to get rid of cricket noise at night. This will help you maximize your resting time and the peace that comes with silence.

Start with Cleaning up your Yard

Ever wondered what happens to the crickets during the day? At this time, they hide in dark spots. Among them are:

When darkness sets in, crickets seek refuge in grasslands near human habitation.

The easiest way to get rid of them is by eliminating the possible spaces they’re likely to hide in, during the day or at night. Cleaning your yard involves removing the logs, leaves, stones, and other unnecessary containers that may be too close to your house.

Any other surface that’s capable of harboring moisture should also be kept at bay. To add on, minimize the amount of junk in your yard. They offer a perfect breeding space for crickets, due to the darkness they project in their shadows or underneath them during the day.

Mow the grass into a sizable length and sweep it together with the dried leaves. The latter offers both shelter and food for these little noisy creatures. If there are any cracked spaces on the concrete used to construct your property, they should be sealed to minimize the possible habitats for crickets.

Get a Pest Catcher

After cleaning your yard, the next valid solution is to buy a pest catcher.  You can achieve this using the J T Eaton Pest Catcher Cricket Size.  Its functionality is enhanced by its stickiness. Once you learn of the possible hideouts for these creatures, you can lay this trap strategically around that area.

The mentioned brand contains 16 traps. This enables you to catch as many crickets as possible, within a short period. The manufacturers rely on a scented and non-poisonous mechanism that attracts these small creatures towards the sticky surface of the trap. It is made to withstand different weather conditions, seeing that the traps have to be set in an open space.

Once stuck on it, the crickets remain immobile and in that position until you discard them together with the used traps. For easier hunting, you can use food remains to entice them. Crickets are attracted to honey, decomposing leaves, fruits, and fungi. Place some of that on the trap’s surface and wait for them to fall for the bait.

This mixture has been tried and tested to prove its ability in pest elimination. When put together, salt and vinegar give out a lethal concoction that leaves no chance to the noisy night creatures.

To come up with an effective mixture, below are steps you should follow:

The mixture is guaranteed to eliminate the crickets within a short period of contact.

You can replace the vinegar with salt and create a similar concoction, despite it being less effective. For this, the ratio of water to salt should be one quart to 6oz. Salt is used in a higher ratio than vinegar because the two have varying degrees of effectiveness.

Another substitute for both vinegar and salt is lemon juice, where you’re required to add 4oz to 1 quart of water. Crickets, similar to many other insects, can be eliminated using essential oils. This explains why most people use the said products as natural insect control measures. Essential oils are manufactured using rosemary, sage, or thyme.

One brand that has proved effective for crickets elimination is the Handcraft Rosemary Essential Oil. It is certified to be 100% natural and pure. While some people use it as a skincare product, the scent emitted from this oil is strong enough to kill crickets in your yard and eliminate the disturbance they cause you at night.

Cinnamon, lemon, and peppermint smells are also suitable for this purpose.

Get a Cricket Predator

Many creatures hunt and feed on crickets. This is a natural way of eliminating the insects while keeping other animals well-fed.

Among the suitable predators for getting rid of crickets are:

Birds eat crickets the same way they munch on other insects. One way to invite birds to your premises is by growing trees and hedges in the yard. Another trick is by introducing nest boxes and leaving containers with bird food in different spots. In the process of feasting on the grains, the birds may wander around and peck out crickets from their hideouts.

If you have a pond or keep frogs as a pet in your home, you may have found a remedy for the annoying cricket noises.

Most pet shops stock dried crickets in the frogs’ food section. They act as snacks or even whole meals, due to their proteinous nature.

This cricket elimination strategy is long-term and cheap. At the same time, you’ll get to maintain healthy and well-fed frogs without digging too deep into your pockets.

Cats hunt crickets as a hobby. They may leave them dead without feeding on them, but the noise problem with the crickets will have found a solution either way.

The cat is likely to trace the location of the cricket chirps, then move in that direction to entertain themselves with a kill. This, however, may not be the most effective method of getting rid of crickets in your yard since some cats are the least bit interested in such activities.

A scientific explanation is yet to be devised to prove why crickets like moving closer to well-lit areas at night. Usually, they chirp near your house due to the light coming out from the bulbs outside your house or within the yard.

You can use the three listed techniques to discourage crickets from hanging out too close to your house and disturbing you with their noises at night:

If your outdoor bulbs emit white light, it’s time to change them and use yellow bulbs instead. Compared to white light, yellow light does not attract crickets as much.

BlueX Amber Yellow LED Bug Light Bulb is a brand of bulbs that emit yellow light to keep crickets at bay. This bulb is an energy saver and does not consume more power than necessary. It is long-lasting and can be placed in any position within the yard.

Switching off the lights will discourage the crickets from moving too close to your house and cause you sleepless nights with their noises. This applies to both outdoor and indoor lights since these creatures can also be drawn close by the light emitted through your windows and doors.

It might not be the most suitable method of getting rid of them, but it’s a good way to keep them away in the meantime as your source for more permanent solutions.

Seeing as switching off the indoors light is not a lasting solution, you can keep them on but block them with thick curtains.

You’ll still enjoy a well-lit house at night without getting bothered by the cricket noises since they’ll have nothing to be attracted to near the house.

This method of silencing the crickets apply to individuals who keep them indoors as pet food in their live state.

The creatures are most noisy when their surrounding temperature range is 82° F and 86° F.  To prevent this, you can lower the temperature in their storage crate or box to approximately 74° F. Their noise frequency drops drastically, silencing the chirping by a high level.

The method is not applicable for crickets that are outside the house, but you’ll notice the change on days when the temperatures are down in comparison to warmer nights.

White noise is a recommended fallback plan if other methods prove ineffective. The sound is inaudible to people but its amplitude disrupts the crickets’ systems. It produces a ‘shhhhhhh’ sound that increases proportionally as you turn up the volume. It counters the cricket noises, enabling you to enjoy a peaceful night.

What Causes the Chirping Sound?

Some people attribute the noises produced by crickets to them bringing their legs into contact with each other and rubbing them. On the contrary, it’s the wings that are responsible for that. When rubbed at the ridges, the crickets’ wings cross each other. This produces the noises and the chirping.

As earlier mentioned, the male cricket does this in an attempt to draw the female ones to themselves. It is also a way of warning fellow male crickets to keep away from a particular female or territory.

There are many species of crickets. Interesting facts show that camel crickets are among the species that live silent within their habitats. On the other hand, field crickets and house crickets are in the melody-making category, as they are responsible for your sleepless nights due to their noises.